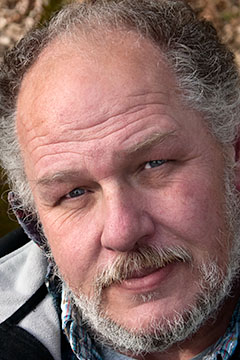 For seventeen years I took pictures but for the last twenty years plus I’ve been making Photographs.  I first became interested in Photography while serving with the U.S.Army in the early seventies.  I had received training in and was doing sound recording for training films when I realized that my ear and the microphone didn’t hear things in the same way.  To achieve good results I had to teach my ear to listen like a microphone.  I had to hear beyond the sounds I wanted, to the noise that the ear perceives but the brain filters.  I soon realized my eye was the same way and that I could teach myself to see using the tools that mimic vision.  I bought a 35 mm camera with some black and white film and started.  The camera came with an operating manual and in those days Kodak included a small pamphlet detailing basic hints about exposing and developing with each roll of film.  The military post had a fine darkroom so I was totally vertically integrated from the start. Armed with that knowledge I began to take pictures of the people and things around me.  I did that for several years, going back and forth between black/white and color film pointing the camera at things and snapping away.  It was only after I examined the slides or prints that I could see what I had a picture of.  I had to take a long break in printing during which I got my career path in order but I still did what picture taking that I could.  I looked at my pictures and I had some nice ones but mostly I had a lot of “if only”.  I thought I had limited control.  The camera after all was only a machine that could do so much.  No machine can replace the eye and there was a limit to what the camera could record. I felt that I couldn’t control events and when my eye saw something beautiful that I should take a picture.  Sometimes it worked and sometimes it didn’t.  I would chalk it up to experience and say better luck next time.  Eventually that experience paid off and I realized that I did have total control, despite all the other variables I did have control over the decision to take a picture or not take a picture when my eye saw something.  I guess I’m a little slow because I had to think about that for a while and I stopped taking pictures altogether.  About fifteen years ago I decided I was ready so I built a new darkroom and bought a new camera.  I bought a used 4×5 inch bellows type camera that requires a more disciplined approach.  It’s big and heavy, hard to use and film is expensive but I love what it does and I have control. I have since moved on to 8×10 that is bigger, heavier, more expensive, and more disciplined. Now, I make Photographs

About five years ago I purchased my first digital camera. The ease and the spontaneity of the digital medium have expanded the gamut of my work and prompted a revamp of this website.